So for our vacation we decided to go to Shenandoah National Park in VA. I knew it would be a challenge for any photography since it has been insanely dry up here and its in the middle of summer. I was also a little dissappointed I could not take one of my lenses due to being in the shop for repair:( I missed it by literally one day from coming back. I still tried to make the best of the situation and came back with a few good shots. In my opinion nothing spectacular except for Nala's Lion King pose. She was named after Nala so it was only fitting. So the adventure begins...

On our way to Big Meadows we decided to stop at mile marker 84 to go see the Jones Run Falls. I thought we had plenty of time to get some waterfalls in and get to the cabin to check in and wonder around since Laura said it was about a 4 mile loop. At first I wasn't going to pop the camera out since well I wasn't really feeling that inspired today. I did force myself to take this photo of the falls and I kinda liked it with the glossy rocks and the splash of green moss. Came out alright for a quickie! At this point we had walked 1.7 miles and Laura said we can either go back or continue and so I asked how far if we continue. She replied like 2 miles. So we went that way to see more falls and take the loop. WELL........... several miles later that turned into the AT and then a horse trail I decided to ask why this is so long. Laura did some bad math and we ended up back at the car after 7 miles. I thought about pinging my location for a helicopter since I thought she got us lost in the wilderness until I heard the sounds of civilization from the road. So on the way to the Lodge we did get to see a beautiful sunset that we would not have seen otherwise due to bad math:) We ate around 9pm and that was only DAY ONE lol.

This photo was taken on Jones Run trail.

On the way up here is the photo of the sunsetting over the valley. I wanted to stay longer but we were hungry and had not checked in yet so we kinda had to go.

After NOT recovering from Day One I wanted to down a path to check out some waterfalls. From my research it said to take the horse trail path. Well we did and Laura question me about trying to take it a little easier that day after we had already hiked 2.5 miles, but I kept going to check the falls out. We descended and ended up going another 6 or so this hike plus 1300 feet in elevation. The falls were nice and Nala enjoyed splashing. It has been very dry up here and really not much rain at all so they aren't as spectacular as they sometimes can be with more water. So after having a "day off" we got cleaned up and had dinner with mom and dad. They got here around dinner time and are joining us for a couple of days. After dinner I decided I needed to go hike some more and went on top of Hawksbill to watch the sunset and get a Lion King pose for Nala, who is named after Nala from the Lion King. Laura got the photo and it was just one shot with a little post editing. The Raven was actually flying by in the photograph. The ravens were enjoying the breeze and flying all around up there. So after the so called day off we ended up with 10 miles after the Day one 8 miles of walking lol.

Found a little side trail with some water sprinkling off under the sun.

This is what my photo crew looks like while waiting. Nala is chilling literally while Ally is being annoying cause she is bored and is ready to GO!

The crew hanging out at the top of Hawksbill Peak

Photo taken on the top of Hawksbill Trail. There are picnic tables on the inside so you can eat some dinner while you wait for the sunset!

Here is the most important photo of the trip! Nala, who we named after Nala from the Lion King since she was found at the zoo and looked like a little lion, got to do her Simba Pose. *note the Ravens were actually there and not photoshoped in! pretty cool!

Nala got to do a lot more splashing in another set of waterfalls called Dark Hollow Falls. Again the water wasn't running very well due to the lack of rain. There is actually one waterfall that is completely dried up and the Ranger said there is no point to even going to see it. Very SAD:( This was a "day off" day finally! Mom and Dad moved from the Lodge area to the campsite and when we went to find them they decided to change campsites so we had to walk up a very steep hill both ways in the snow to find them lol JK. I had to go ask the Park Ranger where they banished the Feimsters to and he said they changed sites. They went for a drive while we walked up part of Stoney Man to scout for the future. We went to the Lodge for dinner and I had delicious Shrimp and Grits! Laura and I split a spinach salad with lots of fruit and finished it off with Blackberry Cobbler with BlackBerry ice cream! YUM! Off to bed for another early day:)

Here is our little cabin at Big Meadows Lodge. It is actually split into two rooms with a door in the middle so if you have more people going make sure you get the whole cabin and you can share the whole thing and party!

Ally was so tired after hiking she would not even come out of her cave to beg for a snack! I think this was a first ever. So all I have to do is hike her 6 miles and she won't beg lol.

5AM call time to go see the sunrise over Hemlock Springs overlook. I wish there would have been more clouds in the sky, but there just wasn't much going on. We did see about a 1,000 deer on the way to the overlook and they all stared at us like why are you on our road during our morning time lol. We got back and met Mom and Dad to go on a hike to see the cabin that president Hoover had built for his fishing trips. After we got back from that we did a little walk around the lodge and Nala FINALLY found some deer poop to nose dive into! We were surprised it took her this long to find some. So someone had a puppy bath. We walked down to the visitor center afterwards just to check it out. They have one charging port for an electric car that looks to be free, Riley! It has been another busy day with over 8 miles again so now it is time to chill before my meat loaf dinner at the lodge.

The day started so clear on the sun rising over the valley... wishing I had some clouds.

My attempt to salvage a shot with the sun rising.

Found an interesting tree on the Rapidan Camp trail. Looks like it has teeth!

At the end of the trail I found a nice little creek shot where Hoover built a camp to go fishing. This was one of his favorite places to go fishing. FYI he has a great book on fishing!

Epilogue: The trout platter was amazing and you get two filets of fish so it could easily be shared. The shrimp and grits were good and also the spinach salad with fruit was very good. The blackberry cobbler was some of the best desert. They also have a bar below the main restaurant that has pizza, beer, and wine. The beer selection is very good and the pizza was spot on. It is a thin sour dough crust, I think, and the toppings were fun and delicious. I'd recommend the Apple pizza with bacon on it! The deer here are not scared of anyone. I think Nala got within 10 feet of one and it still did not run off when she started barking at it. Over all the Big Meadows Lodge has been well worth the trip and a great vacation to relax.

Below are extra photos of the trip 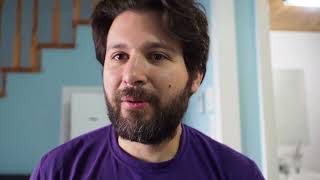 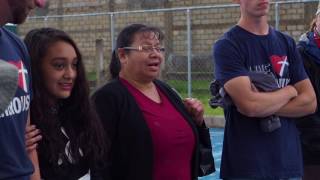 Meeting the families for Habitat

Peruvian Food and other mentions 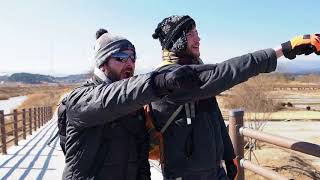 Hockey and the Market